RUTH HAS LEFT THE SUPREME COURT...FOR THE NEXT PLATEAU RUTH HAS LEFT ME IT FEELS LIKE A LIGHT IS SOMEWHERE I CAN'T FIND IN THIS TUNNELL OF WHAT LIFE IS I TOO HAVE TRAVELLED LONG YEARS AS SHE DID WITHOUT HER IS THERE ONLY DARKNESS NOW OR DID SHE PASS THE CANDLE TO ME TO DO AND BE AS COURAGEOUS AS SHE IN HER MOMENTS OF SADNESS SHE KEPT HER WICK LIT NEVER LET IT BURN OUT WHAT LOVE KEPT HER RETURNING WHEN ALL AROUND WAS DARKNESS WHERE LOSS WAS HER CONSTANT SHE KEPT SEEING WHAT WAS NEEDED BEYOND HER OWN COMFORT HER JOYS AND SORROWS WERE NOT WHAT SUSTAINED HER BUT LIKE THE GREAT MOTHER SHE WAS LIT WITH HER PASSION JUSTICE FOR EACH ONE OF US IS WHAT KEPT HER CANDLE LIT I WILL TAKE IT FROM HER INSPIRED TO NOT DESPAIR OF ANY PERSONAL LOSS OR CONFUSION BUT DRESS IN MY BEST EVERY MORNING AND SHOW UP TO THIS LIFE THAT'S NEEDS ME TO ILLUMINATE IT WITH MY CREATIVITY VITALITY AND LOVE
Posted by Brenda Bufalino at 7:51 AM 1 comment:

Posted by Brenda Bufalino at 12:34 PM No comments:

Tap Dance is vigorous. Lassitude is the antithesis of the vigor involved even in executing a flap. Ennui mixed with the silence that is provoking the muse, stares out in space at the sparse but spirit filled garden absorbing the sun on my rocky knoll. I promised that today i would put on my tap shoes. I will after i have fixed my gaze on the bees buzzing the flowers of my oregano plant. (Time passes) Oh a butterfly. Which butterfly is it. It is orange, and then another one. That picks up the pace a little. A breeze. Some leaves wave at me. We are so intimate, the leaves and me. I will miss them when they are gone to bronze and dropped to mulch. A deep breath. Climb the stairs to my studio. My dance studio, which is also my music studio where I practice playing Bach, Chopin and Charlie Parker on my concertina, and the piano where I write music, with one hand at a time. And it now holds the desk that holds my two computors, and all the little books that secret away my passwords, lost in pages between new poems, zoom addresses, notes on my new novel, notes on my new memoir on PRACTICE. Oh yes, that is it my promise. Practice...shoes on. I will soon be 83, on September 7th. When I practice now, I get migraines. So softly I proceed. Ahhh the shuffle, the cramp roll, the riff and all my crawls. Surprisingly the feet remember what my mind forgets. i am grateful but I must not go on too long. That is the saddest part. Now that I have started i want to continue, on and on and on, vigorously. But I must not. If I continue too long, tonight my legs will cramp just as I fall asleep. And soon I will have to wonder what these migraines mean. Do they mean no more cramp rolls, where the heels drop deeply into a bass sound, no more bringing the bass notes up from the heels, creating interesting syncopations when I am playing 8th notes or 8th note triplets. it is a cruel irony that articulation is so clear and precise and that even tonality brings music to my ears, that I can not sustain this blissful activity. Will i get stronger if I dance just a little every day. Will I be able to dance longer? If...that very big if, if every day I can climb the stairs away from the ennui that waits for the world to begin again and the wondering will i begin again with the world or will it be too late, because ennui ate my tap shoes, and old age settled me into my soft comfortable slippers, content to write the next novel and conjour up a new pot. 78 years in Tap shoes hardly seems long enough.
Posted by Brenda Bufalino at 3:50 PM No comments:

Email ThisBlogThis!Share to TwitterShare to FacebookShare to Pinterest
SONG OF THE SPLIT ELM
A NOVELLA &  CREATIVE MEMOIR,
BY BRENDA BUFALINO
Published by Outskirts Press, available on Amazon, Kindle, bbufalino.com and your favorite book store.
Soon to be released on Audible
WRITTEN AND NARRATED BY BRENDA BUFALINO
VOCALIST...Alice Baum
EXECUTIVE PRODUCER...Donna Starobin
PRODUCER, EDITOR...MICHAEL STAROBIN
This novella was inspired by a question;  Why did my Grandmother, Lena Strickland, a stoic Baptist New Englander, insist, and I do mean insist, that her two daughters, my mother and aunt, and her granddaughter, become performing artists?   This question led me on a search for her past.  The past I thought I knew, was not her past and not her truth.  The big family that sat around the dinner table every Sunday, that I thought was hers was not.   What happened to her family:  her mother, her father, her past?  They indeed held the key.  The treasure could not be found.  Only the barest details, were available.  I asked too late.  So I had to create, a past that would set the stage for the stages my Grandmother placed us upon.  Beginning in Wells, Maine, 1878.
Review by Mikhail Horowitz, Performance poet, social commentator, author.
"In addition to being a captivating transgenerational sage. 'Song of the Split Elm,' also grapples with issues such as women's rights, artistic freedom, and the reverent, symbiotic way that indigenous peoples relate to the earth, as opposed to the destructive, proprietary way of the dominant Culture.  The characters are fully alive on the page, their stories engaging and the writing at times intensely lyrical."
For other reviews see Amazon.com. The book has received 5 stars. 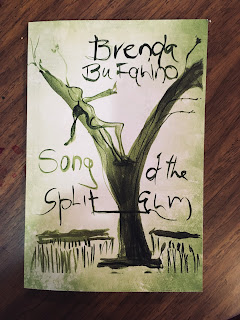 Posted by Brenda Bufalino at 2:56 PM No comments:

bathing in a sea of green
liquid green
running over
and in me
turning my skin
my teeth my life
to green
I become a leaf
to be green
Posted by Brenda Bufalino at 7:45 PM 2 comments:

maples, ash, white pines fallen
what's left of them have all my heart
in their decay unfolding
folding back to earth
Posted by Brenda Bufalino at 3:02 PM No comments: